How One Trip to Uxbridge Hospital Changed Lina’s Life 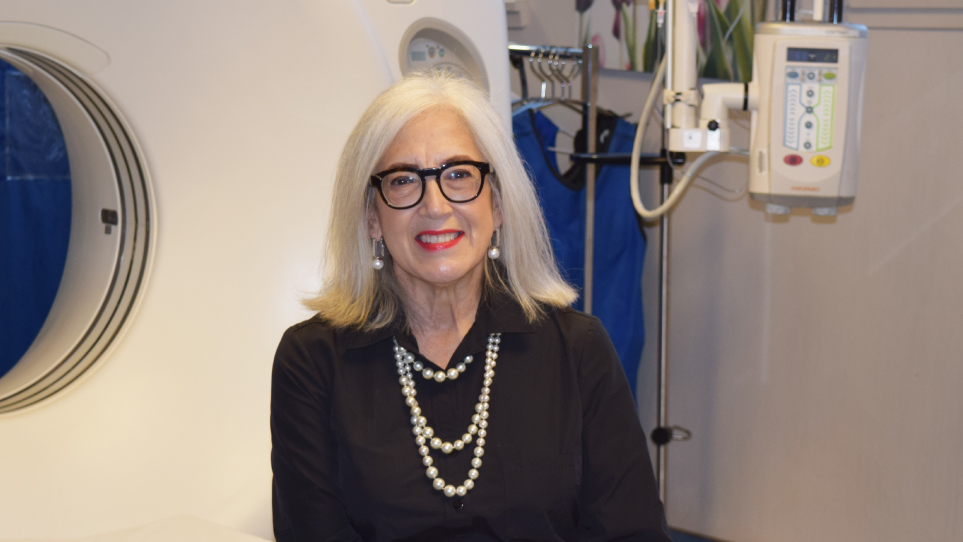 Last year, on September 14, Lina Bigioni was not feeling well; she had unrelenting pain in her side. As it worsened, Lina knew a trip to the hospital was warranted. If you know Lina, you know how thoughtful she is, which was demonstrated that night as she called 911. She did not want to wake her husband or the neighbours, and told paramedics to hold on the flashing lights and sirens. Lina put on her winter jacket and sat on her front porch waiting for the ambulance to arrive.

Dr. Jennifer Wilson, physician, greeted Lina in the Emergency Department (ED). After careful examination and providing her something for the excruciating pain, Lina was scheduled for bloodwork, a few tests, including a CT Scan and Ultrasound. Donations to Uxbridge Hospital Foundation funded the equipment used.

“It was such a fast turnaround, and I felt as though I was the only person in the Emergency Department; I knew I was in good hands,” says Lina. “They never know the next person to walk through their doors, and I am in awe of the team at Uxbridge Hospital.”

The scans showed Lina’s appendix was enlarged; surgery was the next step. She was quickly transported to Markham Stouffville Hospital (MSH), and Dr. Crystal Pallister, general surgeon, performed the operation.

“I know the immense pressure hospitals were under during the first stages of COVID-19, and with only a few operating rooms open at the time, I was grateful to get a spot,” says Lina.

As promised, Dr. Pallister continuously checked-in on Lina. Unfortunately, she had bad news to share.

“I remember she sat next to me holding my hand, she gently said, well my friend, you have cancer,” explains Lina. “I was stunned, absolutely stunned.”

“The beauty of the organization was my tests could be done right down the street. The folks at Uxbridge Hospital made having cancer better; I didn’t have to travel downtown and inconvenience my caregivers.” – Lina Bigioni

Lina was diagnosed with appendiceal adenocarcinoma – a type of cancer that grows from the cells that make up the appendix. Dr. Pallister shared details about Lina’s diagnosis. Lina explained feeling an out of body experience, like sitting at a booth in a restaurant overhearing a conversation happening next to her.

“Never in a million years did I think that’s what was causing my pain. I’m so grateful I went to Uxbridge Hospital that night and they immediately got me the care I needed,” says Lina.

Dr. Alan Ing, general surgeon, who performs surgical oncology, took the time to explain everything to Lina and her husband, Michael. Knowing they had a long road ahead, including chemotherapy and additional surgery, Lina and Michael shared in a moment of silence, staring at each other with tears in their eyes.

Lina was in the hospital for two weeks, and credits the entire health care team with her extraordinary experience.

“The care and concern everyone gave me was remarkable; I never felt rushed and all my questions were answered,” says Lina. “Dr. Pallister promised she would check on me, and she always did. I never had a sister, but that’s the way she made me feel.”

From UXB to MSH, Lina was extremely grateful to have access to a system of care so close to home. Lina’s bloodwork and follow-up appointments with Dr. Ing were done at UXB, making her commute only 15 minutes.

“The beauty of the organization was my tests could be done right down the street,” says Lina. “The folks at Uxbridge Hospital made having cancer better; I didn’t have to travel downtown and inconvenience my caregivers.”

“We are so blessed to have this luxury, my files were shared across the two sites, and I felt deeply connected to my care,” shares Lina.

In addition to her very busy position as Chief of Staff with York Region, Lina is a dedicated hospital advocate, volunteer, and supporter.

“I can’t tell you how truly lucky we are to have the devoted staff and medical staff at Uxbridge Hospital, they are the best,” says Lina. “The community needs to continue coming together to make the hospital better than it already is.”

Lina has visited UXB for other care needs over the years and remembers a time when she was calling an Uber to drive her home; a nurse interrupted and insisted her husband was on his way to pick her up.

“These small acts of kindness are shown daily at UXB; once I enter the doors, I know immediately I will be taken care of” says Lina.

“I don’t think people realize that donations help fund so much with respect to Uxbridge Hospital’s equipment, renovations, and special projects,” says Lina.

At 64-years young, Lina recently celebrated her birthday and raised $3,000 for the Uxbridge Hospital using Facebook.

“Giving back is a way for me to continue saying thanks,” says Lina.