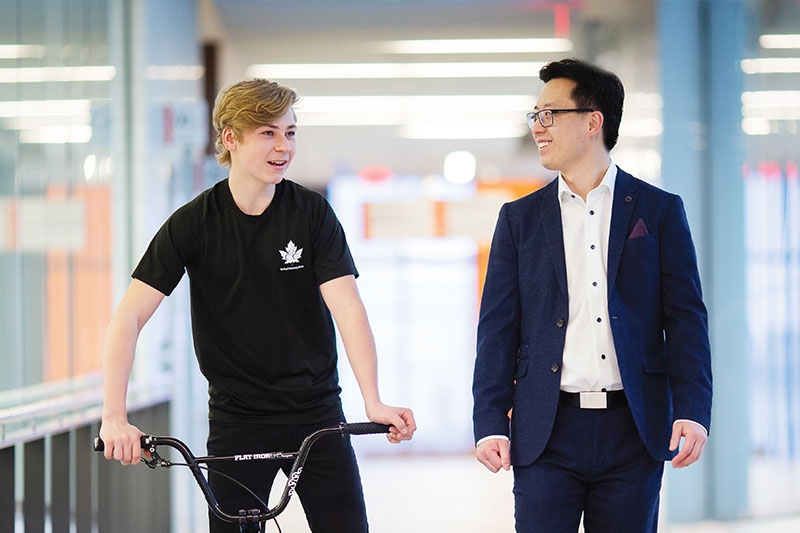 You know a star when you see one in action. Watching Colson Bates soar over the ramps on his BMX bike, you know you’re watching an elite athlete in the making.

“I was always drawn to bikes,” says the 16-year-old, recalling when he was a little boy watching the neighbourhood kids on their bikes. “When I got my first BMX bike, I just took to it and I was hooked.”

It’s the freedom, the creativity of freestyle and racing that appeal to him. That, of course, and the challenge.

“I’d conquer one jump and then go to the next, then the next. I started at the bottom and worked my way up.” He has raced in provincial and national competitions, and now has his eye on the next level.

“It was really interesting to see his biking develop from the time he was six,” says his mom Karen Bates. His parents are avid supporters of his interest in biking and say that as long as he continues to have fun with it and maintains that commitment, they’ll support him all the way.

Colson is at the critical juncture where an activity he does for fun could morph into a lifelong career. “Everybody wants to go to the Olympics. I think if I set that as my goal I could definitely achieve it. I want to keep doing it, keep enjoying it and see where it takes me.”

This is the point in the young athlete’s life where skill, ambition, luck and perseverance all come into play. The support of the team at MSH has played a big role in his future too.

Colson was born at MSH. And in February of this year, he returned — but not under the best of circumstances. He was warming up for a day of routine training with his coach Brendan Arnold, piloting his bike around the track, when he crashed.

“As soon as I started to hit the ground I was thinking ‘I don’t think this is going to be good,’” he says. He broke his tibia (shin bone) and was rushed to MSH in excruciating pain.

There he met orthopaedic surgeon Dr. Kevin Koo, who understood immediately the urgency of getting Colson treated and back to competing as soon as possible.

“With high level athletes, I find they have a lot to lose,” Dr. Koo says. “We’re talking about someone’s livelihood here, and one wrong slip means the end of their dreams.”

Dr. Koo wanted to understand everything about Colson’s sport and what his future looked like, so that he could develop the optimum treatment plan. His priority was to get Colson healed and back on his bike before the season kicked into high gear.

“Dr. Koo made me feel good about the whole situation,” Colson says. “He said, ‘This has happened, we’re going to fix it, and we’re going to do it as soon as possible.’”

It was important that Dr. Koo was able to treat Colson right away at MSH, rather than have him transferred to a different hospital, which could delay treatment. Having the right equipment and technology in the operating room allowed the surgical team to spring into action.

“We’re going through a very exciting time right now especially in the orthopaedics program,” Dr. Koo says. “Surgeries are more elegant because of technical advances. Minimally invasive surgery, same-day surgery, small incision surgery — these are very important for patient outcomes as well as their function afterwards.” Dr. Koo says funding and support from the community is imperative. Donations mean the hospital can keep pace with medical advances, and provide the best possible care to patients like Colson. “We were able to get him into the operating room quickly because of the resources we have, which meant we were able to get him treated and walking relatively soon. These things can’t happen without the latest and best technology.”

MSH is committed to expanding its suite of surgical services and increasing its surgical capacity, especially for orthopaedic procedures like Colson’s. This includes creative partnerships for care beyond the hospital walls such as an innovative, new approach to home care services. Partnerships enable better patient outcomes and allow patients to recover in the comfort of their own home. Fifty per cent of MSH’s orthopaedic surgical patients now return home within the same day.

In 2018-19, over 3,000 orthopaedic surgeries were performed at MSH, including more than 1,000 total hip and knee replacements. Last fall, the surgical team completed its first same-day total joint surgery: a knee-replacement procedure. The goal for these procedures is to minimize soft tissue and muscle damage, which equates to less pain and quicker recovery for the patient, while reducing wait times.

“The most rewarding part of this job is seeing patients be able to return to what they love doing without limitations, restrictions or pain,” Dr. Koo says. “Seeing Colson riding at the level that he does and knowing that the work we do here at MSH helped him with his performance is a very rewarding experience for me as a surgeon.”

Colson says that BMX has become an integral part of his daily life. He couldn’t imagine not riding every day.

“The MSH team and Dr. Koo have kept my dreams alive in the sport of BMX racing and I am very grateful,” he says.

This article originally appeared in the Spring/Summer 2019 issue of Healthy.Together.Markham.Stouffville magazine.