My Journey to Everest Base Camp 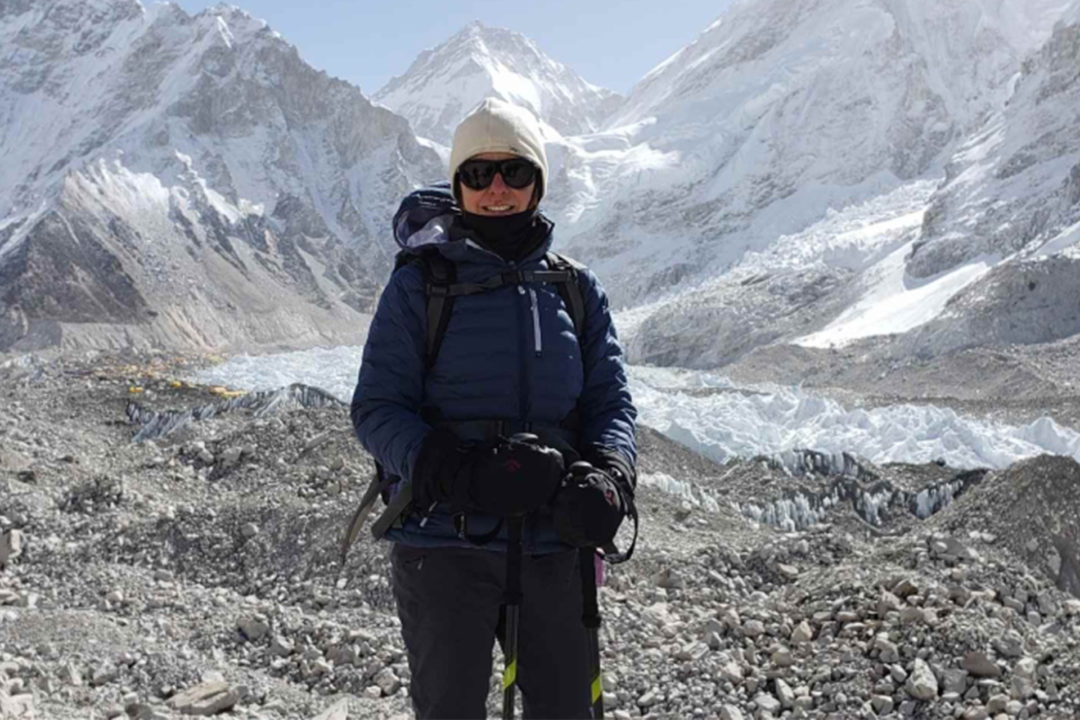 I have had surgery, given birth and run a half marathon but trekking to Base Camp Mount Everest is the hardest thing I’ve ever done both mentally and physically. People told me it would be life changing and that I would not only take a part of the Himalayas home with me, but I would also leave a piece of myself there. I listened to what they said but thought to myself, I’m not really one of those spiritual types. It will be an adventure sure, but it won’t be life changing.

I believe it was about day two or three of a 13-day trek that I was tweeting about my life changing experience. I could blame that on the thin air but the feeling has significantly persisted since coming home to sea level.

There are so many experiences that have stuck with me and have reframed the way I think and proceed through my day. I should start with my exposure to healthcare in Kathmandu. A smaller group of us were lucky enough to spend a week prior to the trek in the city of Kathmandu visiting and touring various hospitals and schools to better understand healthcare in Nepal and also to share our knowledge and expertise.

Perhaps the most memorable and life-changing experience for me was being part of a family that I didn’t know I had.

The hospitals ranged from publically funded, community funded and privately funded. The experience that struck my heart the most was a tour of a university teaching hospital. The leaders and staff were educated at the same level as the nurses and doctors in Ontario and were providing high level procedures such as kidney transplants, hemodialysis and neurosurgery. I was particularly awestruck by the activity in the Emergency Department. One nurse was caring for 26 patients in one zone of the department and this was the normal staffing pattern. Patients were sharing stretchers which were 30 years outdated from our Canadian perspective. One patient was unconscious and had a tube inserted so he could breathe while he was waiting for a bed in the Intensive Care Unit. In our healthcare system the breathing would have been done by a machine called a ventilator operated and monitored by a respiratory therapist.

In this case, not one healthcare provider was with the patient and his family were taking turns pumping the balloon attached to the tube to ensure he kept breathing. None of us could fathom that this was normal care. It was apparent as we toured through other departments that families are expected to not only participate in care but sometimes solely provide it.

Our first week in Kathmandu went very quickly and soon we were flown by small, bouncy plane to the town of Lukla, the starting point of our trek. The runway at Lukla is short, uphill and on the edge of a cliff. We learned after landing that it’s one of the most dangerous airstrips in the world.

On day one, we started the trek in Lukla at 9300 feet above sea level. As we made our way to Base Camp at an elevation of 17,500 feet, our oxygen levels declined taking a severe toll on our energy and strength. But there was a combination of factors that made the trek so difficult both mentally and physically. It affected all of us in varying degrees and it wasn’t necessarily related to fitness levels or age. I found that being a runner was a tremendous help in staying focused, setting my breathing pattern and enduring the long, uphill treks. I didn’t anticipate the rocky terrain, the trail dust, the falling rocks erratically descending upon me or the continual smell of yak dung. I soon learned the value of using my hiking poles and of staying to the high side of a trail edge when a train of yaks laden with duffle bags was passing by. More than once, despite our weak legs and shortness of breath we had to quickly scramble up an embankment to ensure we were not on the edge side of a yak.

Not only was it the need to stay motivated and focused for 13 consecutive days it was as much about the experience during the hours we weren’t trekking. I didn’t expect how cold it would be in the cabins or tea houses as they are called where we slept overnight and that wearing our down filled jackets would be necessary to stay warm during meal times. I learned quickly how to do as much as I could in my sleeping bag before emerging into the cold room in the morning to get ready for the day. I read my book each night at our 8 p.m. bedtime and would read until my arm holding my book could no longer stand being so cold. I learned to accept that I would wake up during the night with air hunger and the need to take very deep breaths to relieve the feeling of being short of breath.

Perhaps the most memorable and life-changing experience for me was being part of a family that I didn’t know I had. Over 30 of us, including trekkers, guides and Sherpas left as a group of acquaintances and strangers but came back with tremendous respect and admiration for each other. As we got closer to Base Camp and things became more difficult in so many ways, we were no longer a group of individuals; rather we all locked down and became one, facing the same challenges together. It truly was a magical feeling and one that we are all desperately hanging onto.

Finally, there are many things about the people and country of Nepal that will never leave me. The people, are gracious, hardworking, thankful and giving. They live without most of the amenities we take for granted yet were always helpful and very thankful for what tourism has done for their country. They take pride in their nation and evidently want to preserve its nature and beauty. As we approached Base Camp I noticed that one of the young Sherpas carrying our medical bag had shoes that clearly didn’t fit him and offered no support whatsoever. Realizing he had similar sized feet to me I gave him my running shoes the day we reached Base Camp. His expression of gratitude made me cry and be thankful that my children do not have to worry about whether they have shoes or not.

I will forever remember the sounds, sights, tastes, feels and smells of Nepal: yak bells, barking dogs, beautiful mountains, colour against dirt in Kathmandu, lemon tea, dal bhat, cold rooms, dust on my teeth, incense burning, teahouse bathrooms and dinner cooking after a nine hour day of trekking.
I can’t stop thinking or talking about the trek. It was the experience of a lifetime to not only raise money for the MSH Foundation to outfit our much needed hybrid OR but to challenge myself with an amazing group of people who are now lifelong friends.

The team is continually fundraising and has raised nearly 80% of their $750,000 goal. Pledge the team, watch video highlights and read the official blog at mshtrekeverest.ca