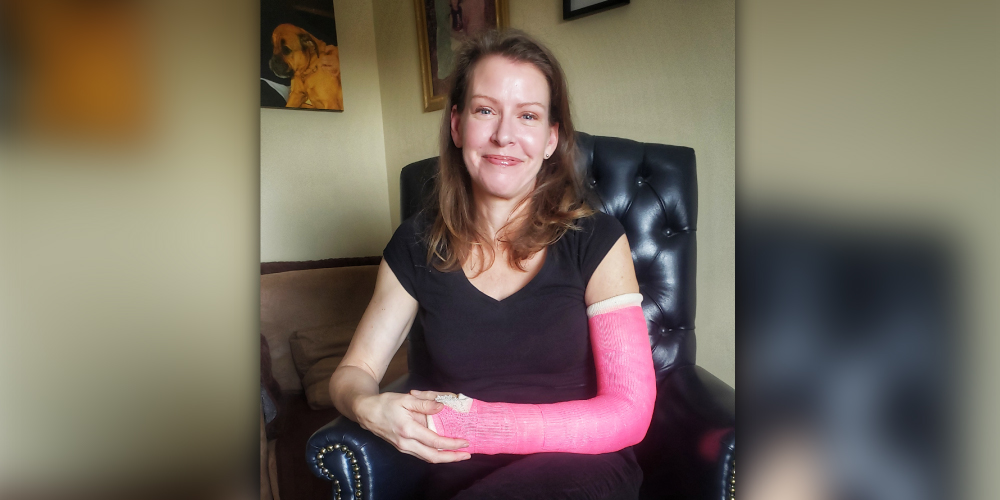 “I cried from relief that I was so quickly able to be seen and scheduled for surgery.”

In December 2020, Kerry Young, a professional dog walker, was out on a daily walk with her clients when she slipped and fell.

Upon returning home, she knew something was seriously wrong. She felt intense pain in her left arm, which she could see was also misshapen, and her complexion was going pale. Her husband called the ambulance and Kerry was taken to her local hospital where it was determined her radial bone had broken in half and a closed reduction was performed.

Young was seen at a fracture clinic in the days and weeks following her injury to monitor her recovery progress. However, it was soon identified that while calcification had begun and her bones were healing, they had shifted and as a result, her arm was visibly shortened and it was becoming painfully uncomfortable.

Young was advised that she would require surgery to repair her arm.

Having heard of Markham Stouffville Hospital’s (MSH) surgical reputation, she inquired with MSH and was referred to the fracture clinic in the Orthopaedic Joint Assessment Centre (OJAC) for consultation with orthopaedic surgeon Dr. Evan Watts and his team, then booked for surgery the next morning with Dr. Crystal Smith, the division head for orthopaedic surgery.

“The level of detailed explanation I received about my break and what the surgery would entail made me feel like I was in good hands.”

“I cried from relief that I was so quickly able to be seen and scheduled for surgery,” Young recalled. “The level of detailed explanation I received about my break and what the surgery would entail made me feel like I was in good hands. It was really important and I needed to hear all of that at that point.”

Young underwent an open reduction internal fixation, which required Dr. Smith to break up all healing bone, and lengthening of her arm to get the bone back to original length. She was able to go home later that day to begin her recovery.

The rapid access clinic (RAC) model that OJAC operates under offers quick consultations – usually within one to two weeks after a referral is received – with a skilled advance practice physiotherapist who can assess if the individual is a candidate for surgery.

Through this model, MSH’s ability to prioritize urgent and emergent surgeries gave Young the relief, both mentally and physically, that she needed. She felt seen and heard and received the care she needed in order to return to the quality of life she depended on.

Young continued to see Dr. Smith on her road to recovery to ensure that her healing went smoothly as she returned to the quality of life she desired personally and professionally. She is grateful for the dedication of MSH’s OJAC and surgery staff for delivering an exceptional patient experience.