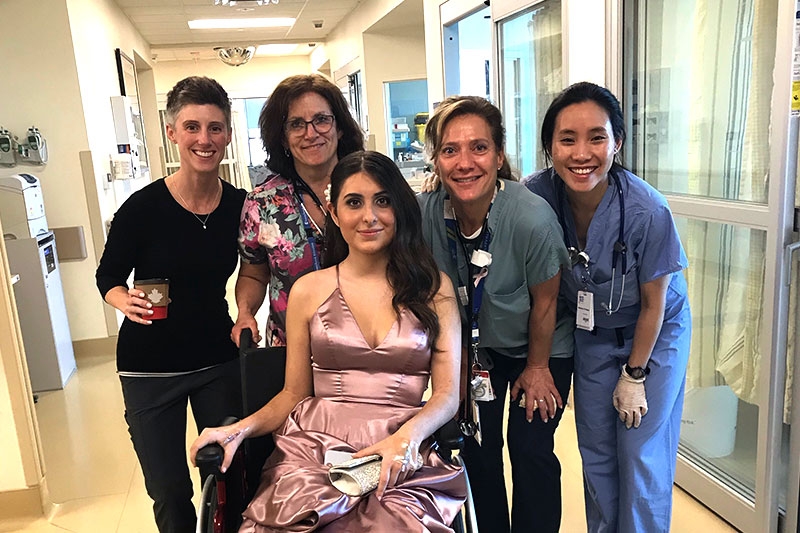 It’s late afternoon on May 23 and Elena Papapetrou looks radiant as she sits smiling in a beautiful pastel pink gown ready for her prom. Family and friends are equally exuberant as group photos and selfies are taken and final preparations are made for the evening’s festivities.

Although this may seem like your average pre-senior prom scenario, it’s unique in that Elena is leaving for the event not from a house or a beauty salon, but from the Intensive Care Unit at Markham Stouffville Hospital (MSH).

“My friends and I have been talking about going to prom ever since grade nine, so it was really upsetting for me when I had to go into the hospital,” said Elena, who was admitted to MSH’s Markham site with an infection on May 10.

Elena’s infection required her to have emergency surgery in the early hours of May 11 by general surgeon Dr. Jennifer Li and be transferred to the ICU for monitoring.

“As she was wheeled in for surgery and every day after that as she recovered, all Elena kept asking was ‘am I still going to prom?’” said Elena’s mother Sev.

At first, Elena’s care team had their doubts about whether she would be able to leave the hospital in time for her prom, but “the amazing doctors and staff at MSH took such good care of her and worked so hard to try and figure out a way for her go,” explained Sev.

The final confirmation came following another surgery by plastic surgeon Dr. Tara Teshima to close her wound just a day before the big event.

“Dr. Teshima told me everything went fantastic with the surgery and asked me when her prom was,” said Sev.

Elena received the good news the day of prom at lunch time. From that point on, Elena’s room turned into a whirlwind of excitement and preparation.

“The staff were so accommodating and helpful,” said Sev. “A staff member who used to be a make-up artist did her make-up. Her nurse who had nail polish with her did Elena’s nails. A physiotherapist brought two different cushions for her wheelchair to see which one would be most comfortable for Elena with her dress. We totally didn’t expect it.”

Dr. Atul Bansal was the ICU physician who cared for Elena. He describes the experience as “absolutely incredible.”

“I’m so glad that we could help this patient realize her dream of going to prom and reach a major milestone along her life’s journey. This is a testament to the holistic care provided by all members of our hospital family to everyone in the community that we are fortunate to serve,” Dr. Bansal said.

“The amazing teamwork is one of the reasons why I love working in the ICU,” added Jennifer Wirch, the physiotherapist who cared for Elena.

Cece Pastor, the charge nurse on duty in the ICU that day, echoes these comments. “Even before we knew for sure that Elena could go to prom, we wanted to help get her as ready as possible so she might be able to participate by video conference,” she said.

“But once it was confirmed, it was so special to be a part of this ‘behind the scenes’ effort. When Elena came out of her room to leave for prom, many of the staff – especially those of us who are parents – teared up, she looked so beautiful.”

After spending about two hours with her friends and boyfriend at the prom, Elena returned to the hospital as tired as she was happy to continue her recovery from surgery.

“We are so grateful for everything the staff and doctors at MSH did for Elena,” said Sev.

“It was remarkable how everyone came together for her, not just that day, but throughout her stay at the hospital.”

Sev points out that “MSH has always been our family’s hospital. We live just five minutes from the Markham site, both Elena and her younger sister were born there and our family has received care there. But if we were familiar with the hospital before, the compassionate and thoughtful care we received for Elena is something we will now never forget.”

Elena was discharged from MSH just four days after her prom and is doing well at home. Her thoughts on being able to attend her prom are simple: “It was a hectic and crazy day, but also a perfect day.”