Meet Tilley and Max, two of our most pup-ular volunteers 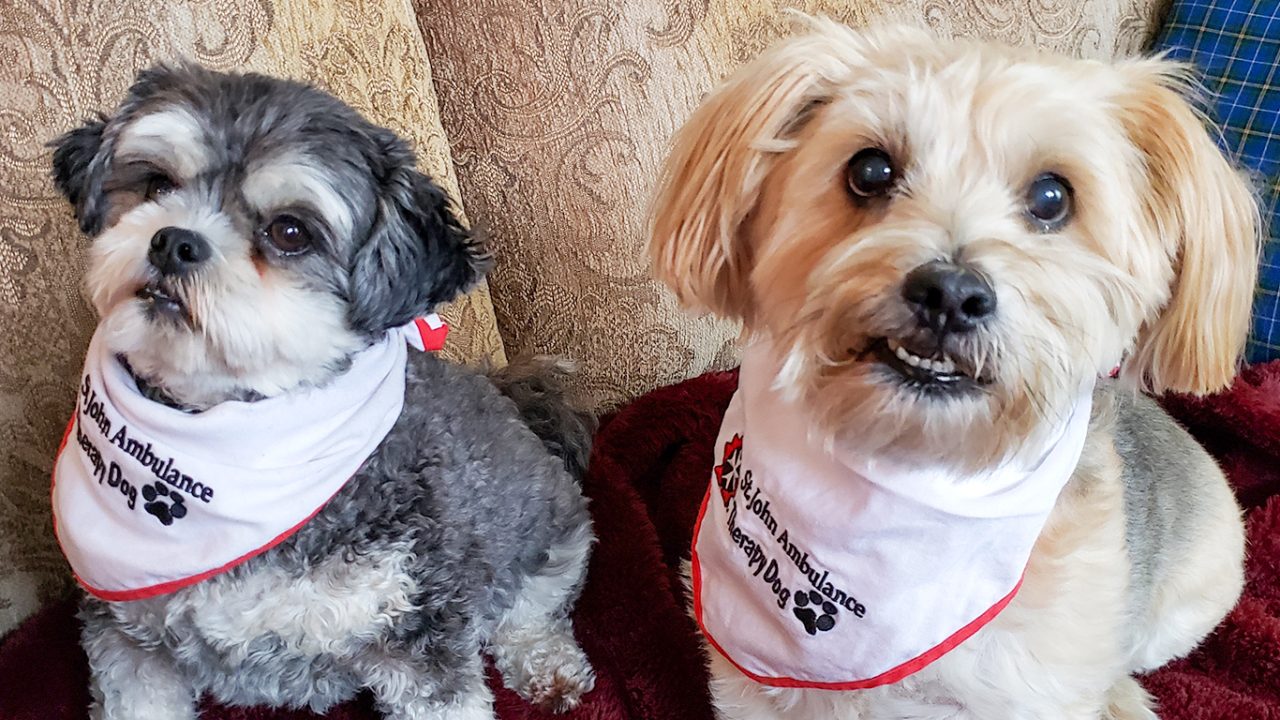 Tilley, a therapy dog from St. John Ambulance and her handler, Shelley Baker, completed their 1000th patient visit at Markham Stouffville Hospital this past December! Tilley has been a therapy dog for almost 12 years. Her first visit to us was in March 2011.

St. John Ambulance’s Therapy Dog Program takes a volunteer and their dog into hospitals, seniors’ residences, and nursing homes on a weekly basis. Through petting, affection and regular visitation, many people benefit both physically and emotionally from the unconditional love of a dog.

To become a therapy dog with St. John Ambulance, a training program and evaluation must be completed. The evaluations include a few different scenarios that best display the temperament of the dog as well as ensuring the handler is prepared to deal with any situation that might come up during a therapy dog visit.

“As a handler, I enjoy the interaction with patients and seniors in long term care homes. The patients in long term care become like family, as we often see the same ones during each visit,” explains Shelley. “St. John Ambulance is such a great organization to be a part of, I’m truly honoured.”

Shelley and her family are no strangers to dogs, having had several over the years. Tilley came to their family as a surprise, but they knew right away that she was a very special dog.

“Tilley is a rescue dog that our family initially took into our home to foster until she was adopted,” says Shelley. ”However, as time went on, we fell in love with Tilley and decided to adopt her ourselves. We had two other dogs at the time and decided if we were adding a third, we wanted to do something special with her.”

Shelley has enjoyed having her dogs involved in the St. John Ambulance Therapy Dog Program, with both Tilley and her other dog, Max, participating. Shelley, Tilley and Max frequent Markham Stouffville Hospital, making visits to patients in several different units each month.

“It’s been a joy to see our two dogs excel in the program, Max is coming in strong and doing very well so far,” says Shelley. “We hope to see him bring joy to many patients for years to come.”

There are many things that Shelley enjoys about being involved with the St. John Ambulance Therapy Dog Program, but the connections she, Tilley and Max have made over the years within the Oak Valley Health community are at the top of the list.

“We have made so many friends being involved in this program. Patients become friends and friends become family. We have truly made lifelong connections,” says Shelley. “I have lost count of the funerals and special occasions we have been invited to celebrate, all of which stem from an initial therapy dog visit.”

This article appeared in the January 2023 issue of The Link. To receive Oak Valley Health’s community newsletter, subscribe now.